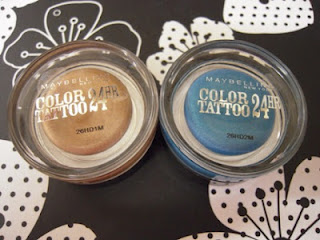 Good evening all! Hope you're having a nice week. Mine has been a bit of a drag so I spent a couple of hours in the bath reading the new issue of Marie Claire and am just about to head to bed to watch River Cottage with a nice cup of tea. It's definitely the simple things in life, eh? :)

Anywho, I just wanted to mention these little Maybelline Color Tattoo 24hr eye shadows that I've been using recently. Being a total sceptic when it comes to "long-wear" makeup I would have been impressed if these had lasted 8 hours without a primer. So I was more than a little wowed when I took my makeup of at about 8.30pm (after applying it at 7am) and my shadow still looked pretty close to perfect 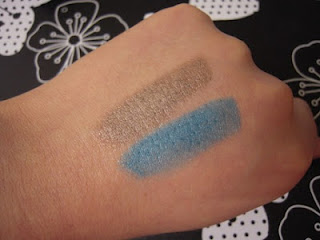 Shades: On and on bronze and Turquoise Forever

I went for a bright shade and an every day neutral because I wanted to be sure they were half-decent before buying any more. I've now got my eye on the silver and dark brown as well because as every day eye shadows go these are bloody brilliant. The texture is like a tacky cream and I can literally swipe a bit of colour across my lid and bam! I'm all set. These are definitely a must for those of us who are really busy (ahem, lazy) and don't have time to spend ages faffing about with 4 different eye shadows every morning

You only need the teensiest little dab of product to get really good colour pay-off over the whole lid so these beauties are definitely gonna last me months... providing I keep the lid on tightly! The texture seems similar to gel liners so I reckon they'll dry out if left open for too long. Oh and talking of which! These can be used as gel liners with an angle brush and the effect is awesome. Hurrah for 2-in-1 makeup purchases ♥ 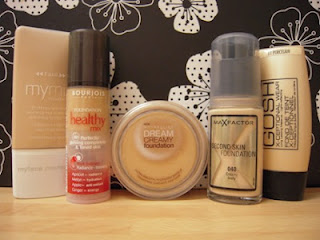 As much as I love a good full-coverage mattifying foundation I find a lot of my favourites can look a tad cakey in natural light. Do you ever do that thing where you feel great about your flawless makeup, then catch a glimpse of yourself in a mirror when you're out in actual sunlight and feel shocked at how unnatural your skin looks? It amazes me how many of my complexion products actually stop my skin from looking like skin

I adore foundations like Double Wear by Estee Lauder, Rimmels Lasting Finish 25 hr etc but I find they're more suitable for nights out or winter weather when a fuller-coverage and, dare I say it, less natural look is perfectly acceptable

Now that being said I should mention that I need good coverage all year round. I suffer from acne around my chin and jaw line so when I say "natural looking" foundation I mean ones that actually hide a multitude of sins but still looks glowy and light, not ones that could pass for tinted moisturisers!

With the lovely summer weather just around the corner (fingers crossed!) I've been veering towards my favourite natural looking foundations more n more. So of course I had to do a little post to mention 5 that I have gone back to again and again. These are all drug store products and can be worn all year round but in bright sunlight, when you need something that looks beautifully dewy and youthful, they really come into their own 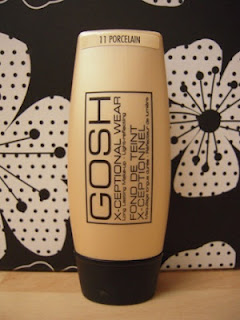 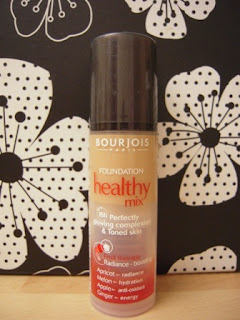 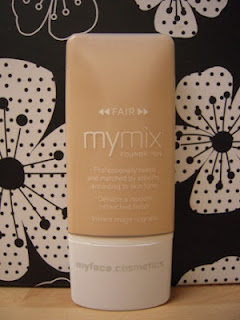 Myface My Mix in fair 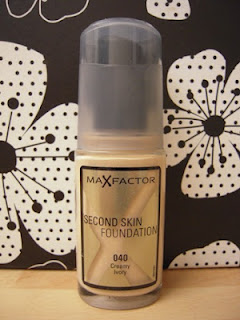 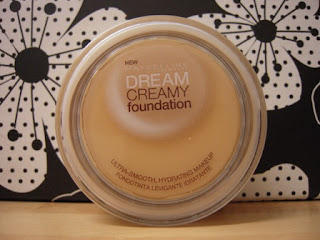 Feel free to mention your favourite in the comments if I haven't included it here! ♥
6 comments: 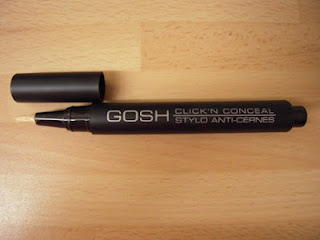 A while back the nice people at GOSH sent me Click n Conceal. It's a pen-sized stick with a little brush applicator on one end a clicker on the other which you press to dispense the product. You guys have probably noticed that I absolutely love GOSH products and as far as I'm concerned the quality is always beyond awesome. Well, almost always... 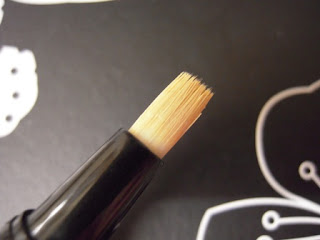 This concealer is completely average and not something I'd ever buy or recommend. My biggest complaint when it comes to concealers is often that they aren't pigmented enough and essentially just look like a medium coverage foundation. Which would be grand if I was after a medium coverage foundation of course, but I prefer something that will cover dark circles and spots entirely. This product is ok when you just need to hide slight under eye discolouration but for anything more obvious it just doesn't cut the mustard 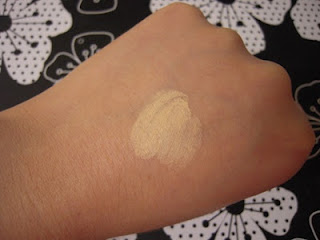 The texture is lovely; very smooth and creamy and manages to settle under the eyes without sinking into the fine lines but at the minute I have some bright red spots on my chin and there's absolutely no way this would be good enough to cover them. It's not buildable - it's one of those liquids that doesn't cling to itsef, so if you add another layer and try to blend it the colour it just smears it out and doesnt actually change the depth of colour whatsoever. So overall it's a big pile of meh Too Faced In Your Dreams Palette

Too Faced In Your Dreams Palette 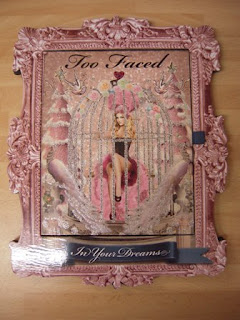 This was a Christmas pressie and since December I've got some good use out of it! The palette includes eye shadows, blushes and lip glosses, which have been split into 3 separate complimentary sections. The top combo can be used to create a natural look, the middle is for a feminine, flirty look and the bottom one is for a seductively smokey look. Being a bit of a rebel myself I've been known to mix the combinations for a totally different look. Cos that's just the way I roll 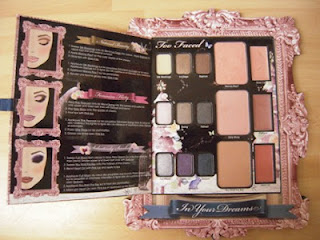 The quality of this is second to none and the shadows are ridiculously pigmented so you don't have to keep going back to the power with your brush to build the colour. I adore the Wanna Play blush at the top and have worn it a lot but I've barely touched the lip glosses. It's not that they aren't nice or anything but I drink a lot of tea and have to re-apply my lip colour constantly (well I would if I wasn't quite so lazy) so I really need to wear a colour that I can carry around in my bag and this palette isn't exactly designed with easy transportation in mind 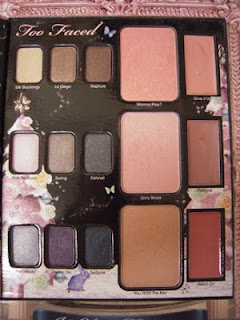 But if I'm honest the packaging alone would be enough to make me love this. It's just so darn pretty I keep it propped up on my shelf like a piece of art. Fantastically practical inexpensive art :)
3 comments: 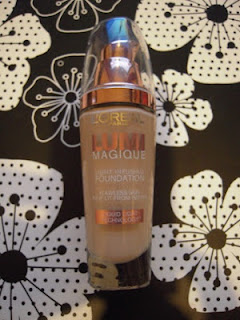 Good evening all! Hope you're keeping well and having a nice week :) Mine has been fab! I started reading The Hunger Games and couldn't put the books down; I clearly don't get out much cos a good book is more than enough to put me in a great mood. But you know what doesn't put me in a good mood? Bad makeup. See what I did there? As seamless introductions go I think that one was... Almost as bad the foundation I've been using. God, I'm on fire tonight

In all the years I've been wearing makeup I've never liked a single liquid L'Oreal foundation. Not ever. So I guess I shouldn't have been too surprised when I found Lumi Magique to be absolutely crap but the eternal optimist in me had high hopes so I was really disappointed. Not least of all cos I bought this instead of the new Bourjois 123 foundation which I've been eye-balling for a while

Now I know this shouldn't matter much but I can't help being ridiculously irritated by the name because, well, I'm not exactly sure why, maybe because it over-promising? I dunno about you but if something has the word magic (or variations of such) in the name then I'm gonna expect some serious results from said product. Magical results, if you will. And this totally under-delivers

The foundation incorporates loads of my pet hates - it doesnt blend well, the coverage is rubbish, it doesn’t look natural and is more greasy than glowy. All that and it costs £10.99 so it's not even particularly cheap for a drugstore foundation!

I've worn this 3 times cos although I hated it first time round I'm nice and believe in second chances. I applied it yesterday and today and disliked it more each time. But I like to find the best in things (See? Nice)so I wanted to mention that I like the name of the shade I bought, it's called Rose Pearl which just sounds so pretty. Yep, thats the best I can say about this
6 comments: