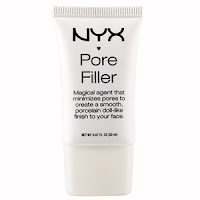 Evening all :) So I was just thinking back to when I was a teenager and the only makeup I wore was a dusting of Rimmels Clear Complexion powder and a dab of lip balm... Perhaps a gloss when I was going all out. How things have changed!

I don't exactly cake it on with a trowel or anything but I've definitely noticed more n more steps being added to my routine over the years, it doesn't seem that long ago that I first learned about things like primers and highlighters

For me to consider adding yet another product to my "steps that can't be missed" list it has to be pretty fantastic  The NYX Pore Filler was one of those spare of the moment online buys; I was won over by the claim on the tube which says "magical agent that minimizes the look of pores to create a smooth, porcelain doll-like finish to your face" So, yeah, my expectations were pretty high!

First things first; the texture is a cross between a cream and a liquid and is unbelievably silky but it's super thin so doesn't feel heavy and uncomfortable on my face (a problem I've found with a lot of other silicone based products) It really evens out the surface of my skin and does a great job of filling in any obvious pores so they appear to shrink even before I've applied my foundation. Generally they're small and well behaved but sometimes the pores on my cheeks and nose seem large enough to be used as storage when I'm only carrying a tiny clutch bag and although this doesn't get rid of them entirely it makes a gigantic difference

There is a very light tint to the cream but this barely shows up, even on my ghostly pale skin. I've found my makeup looks fab when applied over this but it doesn't work in the same way as a primer because it doesn't seem to actually extend the wear of my foundation at all. Hardly a major issue considering that's not what it was designed for but it'd be a lovely little bonus!

Here in Belfast I haven't found any stores that actually stock NYX products so I get most of mine from Amazon, though the majority of places online seem to be selling this for about a tenner. I reckon that's good for 20mls cos I only use the teensiest amount and I can see this lasting me months

Right, I'm off to make some brinner, hope you have a great weekend ♥