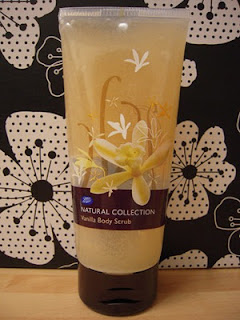 When I was a teenager I swore by the Natural Collection stuff from boots! The packaging was always super bright and the scents really appealed to me because they were fresh, fruity and totally over-powering (I wasn’t one for subtlety!)

Some of the products have held up brilliantly and I’ll still use them nowadays so when I’m wandering around Boots I’ll often pick up a few things from the range. Over the last couple of months I’ve been obsessed with vanilla so have bought dozens of vanilla scented products … Unfortunately I haven’t come across many scrubs so when I spotted this one by Natural Collection I had to have it!

This is actually one of the most rubbish scrubs I’ve bought in, oooh, 5 years? It’s just dreadful in every possible way. The smell is gross cos it’s so chemically and it’s so un-vanilla-ish that I wouldn’t be surprised if it was the wrong product in the bottle

It gets worse though… the texture is really runny and doesn’t lather up at all so I have to use loads of this to actually give the beads a chance to do their job. The beads are fairly scratchy and because the liquid isn’t very creamy I just end up feeling like I’ve been rubbed all over with a pumice stone and water. Not normal water though; water that smells like yucky fake vanilla

Cost - £3.17
Size – 200mls
Does it work? – Not for it’s intended purpose. However I’ve found it gets the limescale off my bathroom taps like nothing else
Will I reuse? – Not even if they were giving it away

Haha the limescale part is funny! I find good scrubs are hard to come by... I usually make my own!